We're just back from North Devon, where my in-laws have the good fortune to live. Even in the 21st century Bideford feels like a pretty remote place, with only the A386 or A39 getting you to the town. Train by London means almost three hours to Exeter, then a 60 minute trundle on the Tarka Line (mostly single track, some stops by request to the guard) and then a half hour bus ride from Barnstaple. The 'Little White Town' (as Charles Kingsley called it) is a jumble of Georgian and Victorian buildings strewn along the Torridge estuary, a working port with an open quayside. It's still one of the main places for the export of Kaolin (china clay), extracted over the border in Cornwall. Ships generally tie up opposite the Talbot Inn, which remains the 'earthiest' pub I've ever been in, with a lot of flat noses, DIY tattoos and missing fingers, ears and limbs. Despite appearances it is a friendly place, although on my mercifully few visits I've kept my eye on the door for the pressgang. Most of Bideford's pubs have had ghastly cool-in-1986 makeovers and only three or so have a decent selection of quality ales or any real character. Best of the bunch is probably the Kings Arms, near the mediaeval river bridge. Here they've got six handpumps, with the likes of Adnam's Broadside, SN Spitfire, Exmoor Ale, Doom Bar, Tribute and one from local micros Jollyboat or Country Life. Jollyboat do some drinkable if workmanlike beers, the best of which is Grenvilles Reknown. This is a decent ruby red, fairly malty pint which i've never seen outside of Bideford. If you've never had it, you ain't missing much. 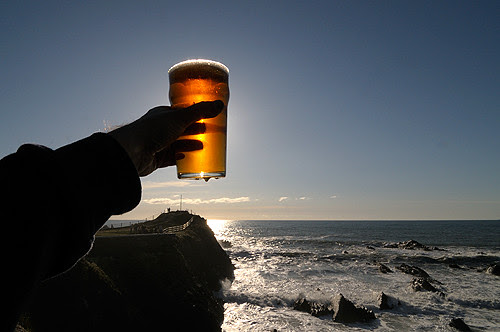 Here's a pint of Tribute from the St Austell brewery, taken outside the Wrecker's Bar at Hartland Quay. I have to say, it was just about the loveliest and most spectacular spot I've ever sunk a brew.
Posted by TIW at 9:00 PM

Affer, apologies for the time it took to get your comment up - we've been away again.

It was about the best pint I've had on my countless visits since meeting Mrs TIW. It's a fantastic area, but the beer's a bit hit-and-miss.

Nice picture. We should see if we can have a bit of a "scenic pint" competition!

The more I drink, the worse the pictures get - even though I may think they are getting better!