Please Do Adjust Your Set 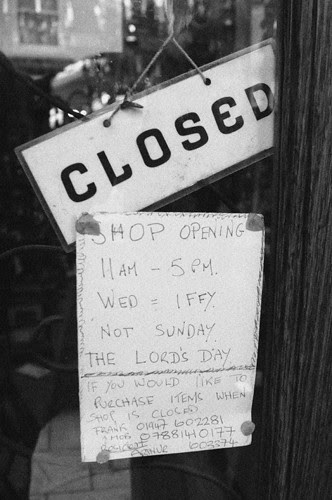 I've had enough of Blogger. The recent outage was the final straw, and I'm off to a new gaff. My half-arsed opinions and brain-emptyings will now be found at:

If you don't see a link to your blog on my new site and you think it should be there, drop me a line and i'll sort it. If you've been kind enough to link your blog to mine, I hope you'll continue to do so. See you soon!

Joe Fusniak would have been well looked after when he appeared at the White Lion, which remains a great, unpretentious pub. Not a few places in the Dales have been gastrated with varying degrees of success. I've heard of stares and even outright hostility toward visitors wanting just a pint and some crisps rather than a glass of Barolo and a bisque-infused crab and pea risotto with sun-boiled onions. None of this, mercifully, at the Fox And Hounds at bunting-wrapped Starbotton where we stopped for a post-Pike quencher. It's a classic Dales Inn - bow back chairs, flagstones, old shotguns on the walls - and a polite notice asking walkers to remove muddy boots. There are never any surprises with beer in a Dales pub. Jennings, Theakston. Maybe a Taylor's. There's always Black Sheep Bitter, which must surely have a claim to be Yorkshire's Official Pint with the demise of Tetley. 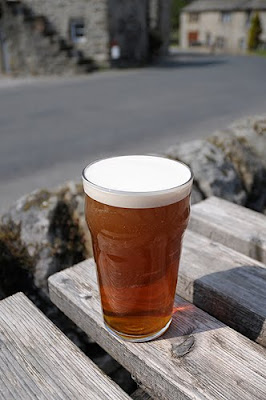 The Fox's guest was the Yorkshire Dales Brewery's Nappa Scar, and we took a couple of pints out front to watch chartered accountants wobble past on their Harleys. On our last encounter with an unsparkled Nappa Scar, I thought it smelled like a farmyard. Here it was all hops, billowing facefuls and huge mouthfuls of the stuff. I don't know much about IBUs - but I bet this wasn't far off the Stone Ruination that I tried t'other month. The hophead's perfect pint after a four-hour walk. And we didn't even mind that it was £3.20 - about the same price it would be at the Harp just off Trafalgar Square.
Posted by TIW at 12:04 PM 2 comments:

Labels: Beer, How Much?, pubs, Yorkshire

Sets Neat Prints Into The Snow

Royal Wedding Day, Upper Wharfedale. Union Jacks flutter with Yorkshire flags in the late spring sun. Trestle tables are being set up on village greens, cakes brought out from ovens in ancient stone cottages. You couldn't have asked for better weather, everyone said.
Unless you were up Buckden Pike, like Our Lad and me. The Pike wore a thick mist, which blew in like a sinister blanket from Kidstones, directly to the North. The temperature was several degrees colder than the valley bottom. Walls and bog dissolved into grey after only 50 yards or so. Still, fortified by our miraculously still-warm pies from Lunds we found what we were looking for. 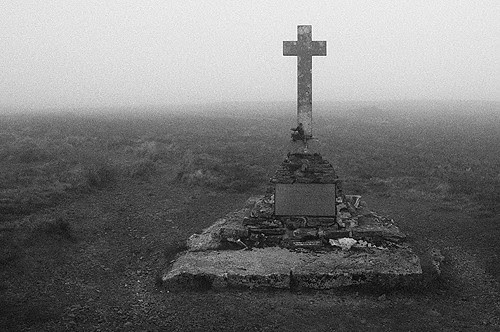 This memorial commemorates the crew of Polish Air Force Wellington N2848, which crashed here in a blizzard on 30th January 1942. The only survivors were the wireless operator Sgt Jan Sadowski and the rear gunner, Sgt Jozef Fuzniak. Wrapping the badly-injured Sadowski in his parachute, Fuzniak attempted to make his way down the mountain for help. He had a badly smashed ankle, not a clue where he was and it was snowing heavily. Fuzniak limped off in agony, using a broken wooden strut as a makeshift crutch. After a time he noticed the tracks of a fox heading in the opposite direction. Knowing that the animal would seek shelter and food, Fuzniak followed the pawprints, an action which undoubtedly saved his life. He emerged from the Pike several hours later and almost delirious with pain and hypothermia near the White Lion at Cray. The weather was so bad that rescuers could not find the wreckage for another two days. Help came too late for Sgt Sadowski, who had succumbed to his injuries.

"Joe" Fuzniak returned to flying, and was again a sole survivor when his Wellington was shot down on a raid over Duisburg later that same year. He survived the war - including the Death Marches - and settled in Bexleyheath, where he still lives.

Assisted by several locals, Joe built the memorial to his comrades over three days in 1972, camping on the fell as he worked. Set into the base is a bronze fox's head, its nose rubbed shiny by hundreds of visitors. 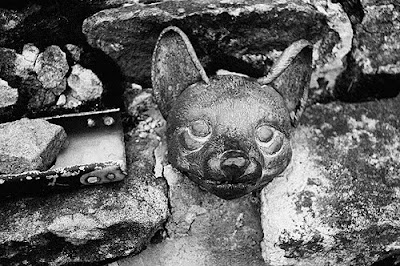 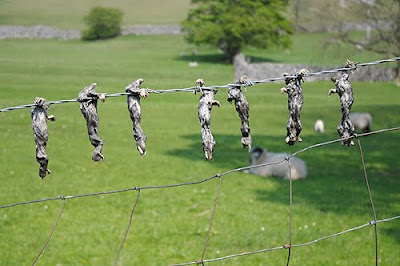 Upper Wharfedale is the last place in the country to still have a mole-drying industry. Here's a late spring catch, desiccating nicely on a rack just outside Starbotton. Wharfedale Mole is a prized delicacy in Southern Europe, particularly in the Pyrenees where the rocky landscape makes the little critters very rare. There are perhaps a couple of dozen of these drying frames remaining in the Dale, though when Daniel Defoe passed through here in 1724 writing his A Tour Thro' The Whole Island Of Great Britain, Divided Into Circuits Or Journies there were several hundred. He wrote:

"Wharffe Dale is famed for moles, and they make a sort of dried meat here for the Spanish and the Porto trades; and though their moles here may not be as fine as Welsh, they told us their meats are as good. But that is not my business to dispute, the Welsh moleers deny it; and so I leave it as I find it. But there are rackes as far as a man can see, and a good living can be had by a skill'd moleer. The people here are dressed better than any London Dandy, tho' they suffer terrible from molegut if they do over indulge."

The local producers co-op is making tentative steps toward getting the likes of Waitrose to stock it as 'Yorkshire Biltong'. I've never tried it myself, but I was once chatting with an old farmer who swore by dried mole as the secret of a long life. 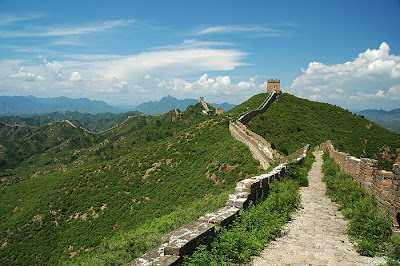 Last friday I constructed a wardrobe. It's a massive, hugely heavy thing and looks like a coffin for a couple of obese giants. I even had to affix battens to the wall to keep the beast from falling on us, which given my DIY 'skills' is the equivalent of a caveman making fire. It took me about nine hours and was like wrestling with the Ark Royal. By the evening I could barely walk. I needed a beer. The one I reached for was a Tsingtao that Mrs Wheels had put in the fridge two days earlier. Yes, that adjunct-heavy Chinese lager which invariably gets a hammering from all corners of the beer blogoshire for (among other things) its uncompromising lemony blandness. You see, I have a soft spot for the stuff, which provided one of the milestones on my 'journey' to becoming a beer nerd.

Some years ago, I walked eight miles of a lesser-visited and more or less unrestored section of the Great Wall of China, with 80-degree vertical climbs in some parts. It was a quite incredibly hot day. The hottest i'd ever experienced, and despite the guerrilla water sellers in some of the watchtowers, very difficult to drink enough fluids to keep off a raging thirst. At the end of the hike I staggered into a 'bar' - really a collection of plastic garden chairs with an enterprising local flogging drinks from an oversized coolbox. In all my years as a beer drinker, nothing has ever come close to tasting as good as the ice cold can of Tsingtao I glugged down that afternoon in Simatai. I'm pretty sure steam was actually coming out of my ears.
Posted by TIW at 12:36 PM 6 comments:

Those We Have Loved

I'm a photographer who loves beer, so I've often got my camera with me in the pub. I've had nothing much to blog about just recently, so I hope you don't mind me sharing some images of beer that i've enjoyed over the last year or so. Apologies if some of the captions read like an optician's wall chart - It's times like this when I wish i'd chosen Wordpress over Blogger. 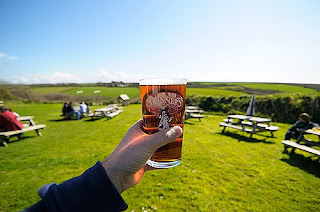 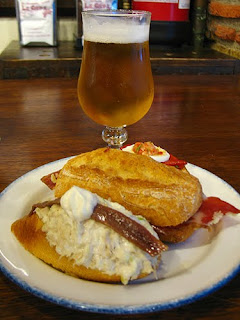 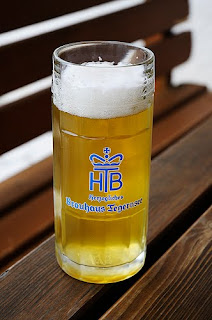 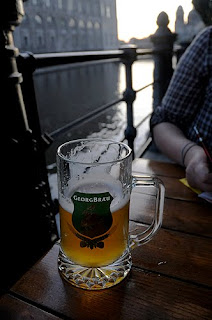 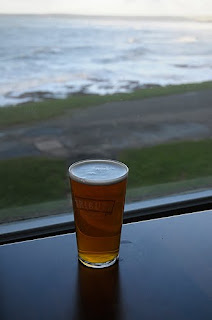 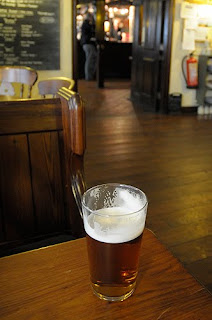 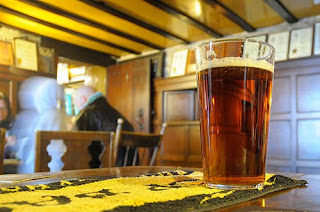 The Square and Compass, Worth Matravers 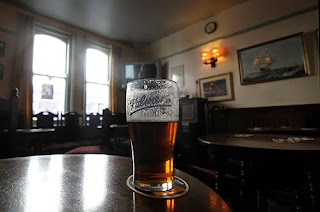 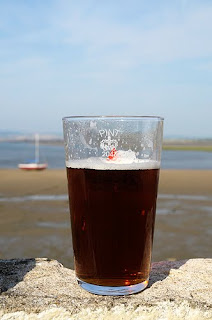 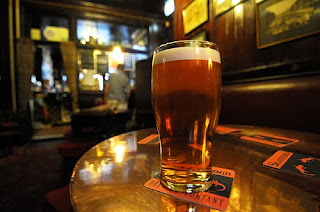 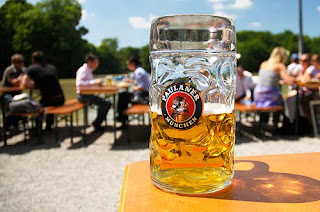 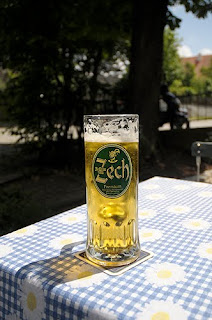 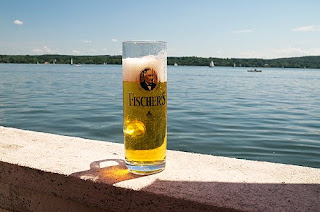 It's amazing how much you can carry on a bicycle. In those far off, pre-car, pre-Vespa days of dwelling in Zone One I could bring home a weeks shopping on my bike. Rucksack on my back, newspaper down my jumper and carrier bags swinging from the handlebars. Easy. Beer bottles are hard work, though. Awkward shapes, hard to pack. Easy to smash - and they're heavy. 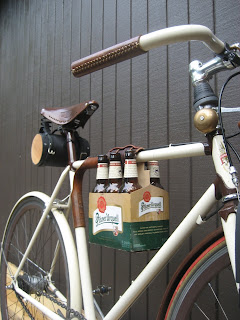 But look at this, from Etsy's Walnutstudio. A darn site more useful than its original purpose of carrying a bicycle polo mallet. A what?

(Thanks to my old friend Rubyspirit - creator of fine and unique jewellery - for the tip-off)
Posted by TIW at 12:50 PM 2 comments: