Home this weekend to Keighley, the town where I was born, bred and buttered. I lived there until I was 21, when I left to become a media ponce Down South. It's a friendly place, where it is impossible to stand at a bus stop or in a Post Office queue without being engaged in a conversation with a total stranger. This person will acquire a pitying look in their eye when they realise you have the misfortune to live where beer costs almost four quid a pint and gets served flat in a gastropub with battered sofas and no beermats, full of other media ponces tapping messages into Blackberries to their spouse that they'll see in half an hour anyway and eating olives at three quid a bowl, and how much to get a taxi home? Blimey.

I can honestly say that I can think of more good pubs in the Keighley area than in central London, and even in most of the more ropey ones you can get a reliably decent pint. Of the good ones, Ossett Brewery's The Albert, a handsome embodiment of Victorian optimism, is a real standout with ten handpumps. Nearby are freehouses the Red Pig and the Cricketers, which always seems to have at least one of Moorhouses' sublime brews on. There are loads of others within a quick ride of the bus station - The Golden Fleece at Oakworth, The White Bear at Steeton, practically every pub in Haworth ... it's (almost) all good in the 'hood. 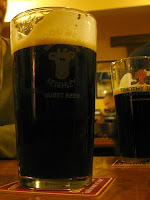 Two in particular - The Brown Cow and the Boltmakers - are among the best town pubs I've been in anywhere. These are owned by local brewing heroes Timothy Taylor, which has a varied pub estate in the town - from old-man-and-a-jack-russell to night-out-with-the-lads, and everything in between. All of these are worth a visit, and I've tried and failed a couple of times to visit every one on a pub crawl. I was in the Brown Cow on saturday night, and very happy to be there. Along with Taylor's Best Bitter, Golden Best, Landlord and Dark Mild were a seasonal from York Brewery and Suddaby's After Dark Coffee Porter. This was as black as a crow's eyepatch and full of brooding dark notes of toffee, liquorice and yes, espresso. Heavy, but highly drinkable and utterly delicious - it just slid down. They get some unusual guests ales at the Brown Cow. On my last visit they had Naylor's Craven Kriek which was baffling the regulars. I can only describe it as a pale ale with cherry juice in it. It was a lot better than it sounds, but it hasn't been back on.

Taylor's latest acquisition is the Lord Rodney, next to the Parish Church. This is supposedly Keighley's oldest pub, and it's certainly got a history - and not always a happy one. It is rumoured that a few of the local bobbies have rather nice conservatories paid with overtime generated by the Rodney. The pub closed a couple of years ago, and was snapped up by Taylor's who rebuilt extensively and reopened last year. The interior looks overdesigned to my cynical eyes - something that could have been dreamt up by Laurence Llewellyn-Bowen after having lobsters and gorgonzola for supper. They do "cocktails Created by Theme magazine's northern bartender of the year" (It says here). No doubt in the evenings they play 'chilled beats'. 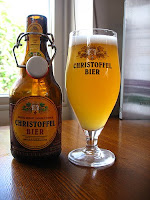 Saving grace is that they sell some fairly unusual bottled beers along with the full range of Taylor's ales (Be warned - Mr and Mrs TIW Snr had the worst pint [and half pint] of Landlord they've ever had here - I can only hope this was a freak aberration.). They've got Orval, Kwak, Brugs Zot, Westmalle Dubbel and - new to me - Christoffel Blond, all at prices that don't make you want punch yourself in anger. Orval and Westmalle have long been favourites of mine but the Christoffel I had yesterday was like falling in love with beer all over again, a banana yellow, zingy and spicy Dutch delight that felt like a lot more than 330cl. Where had it been all my life?

Taylor's are moving with the times and there's a place for the Rodney as well as their more traditional pubs in Keighley. It's not my kinda place, but It's a decent pub to drop by if you want a break from the norm. And I think we can all be thankful that they didn't decide to call it The Lord Rodney Lounge.
Posted by TIW at 11:12 AM

You ought to be in charge of tourism for Keighley - their website isn't one tenth as good as what you have written here. Beer and railways: that's what could restore the town's splendour - well, that and pork pies!